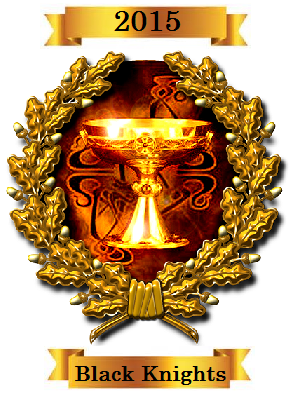 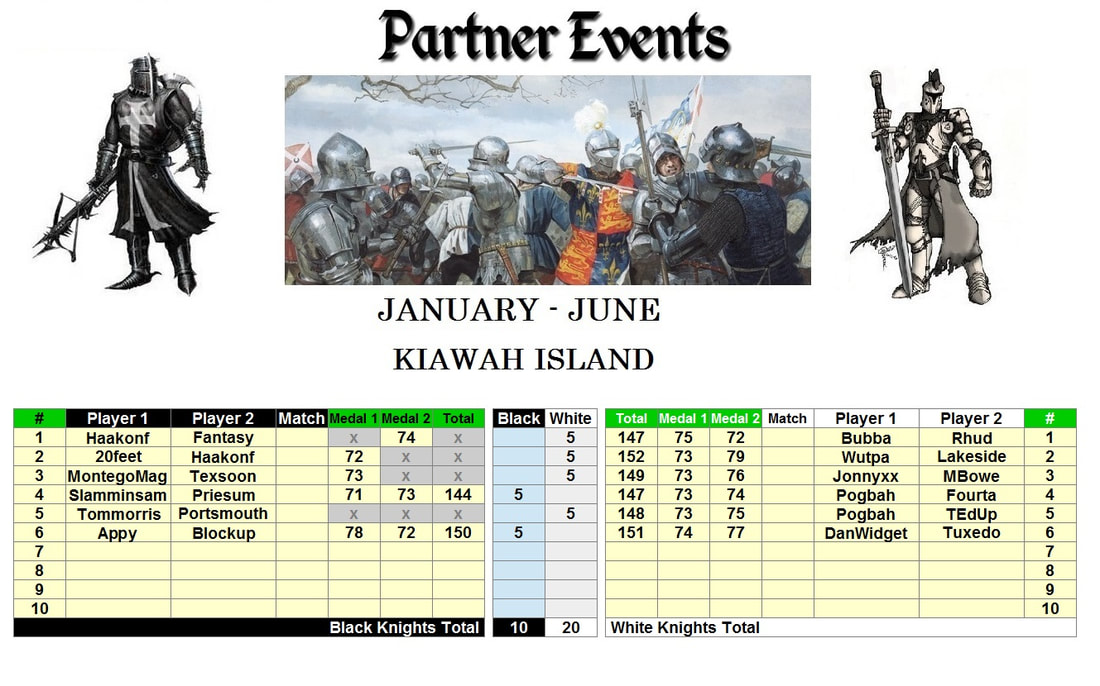 The Format:
All the point structure for this event are shown on the google spreadsheets.
The Tournaments:
The top 10 players as well as any member that complete any Major Tournament, Classic Tournament or Monthly Medal earn points for your team in the Quest For The Holy Grail.
In the event of a tie for the win, first and second place points will be determined by a playoff, all other ties both players are awarded the points.

Knights and Knaves:
Each member has been ranked based on handicap, average, how you finished in 2016 and a few other "factors" and you have been assigned a Professional Golfer from the P.G.A. Tour as your partner and knave for the duration of 2017. (Shown below)
Your P.G.A. Professional is now your trusted Knave in nine future Monthly Medals.
This event will be run in addition to the Monthly Medal, this is a totally separate event.
You and your Knave will be able to win points for your team as partners.
The score posted by your Knave, in the first round of the selected P.G.A. events shown below will be added to your gross score posted in that same month's medal, and the lowest score wins.
For maximum participation if your knave does not compete in the first event on the schedule (a) then his score in the very next P.G.A.event (B) will be used, if he does not compete again then once again the last one that month (C).
If he skips the entire month then you will be elliminated from the Survivor.
If you or your Knave does not enter any event, just like any other L.V.K.C.C. event, it will be considered you “did not enter” or you“WD” and you forfeit that month's event.
Once again it's the luck of the draw, however if you Knave is injured or withdraw's from the 2017 P.G.A. Tour you will be given the opportunity to pick a substitute from the list shown below.
Holy Grail and Golden Knight points will be awarded to you and your team and they are the same as the points awarded during every Monthly Medal.
A leader-board will also be created and the results will be shown on this page.
Ironman II: This is an added twist to this contest.
You and you Knave will have to complete all nine events, if you or your Knave does not enter at least one event in any month  you are out of this contest.
​The leaderboard for this event will be shown on the Ironman page.
No points will awarded in this event and is designed for bragging rights as well as a topic of conversation on the club forum.
​Starting in July all results/leaderboards are now only shown on the Google spreadsheets.
For a larger view click on any Image. 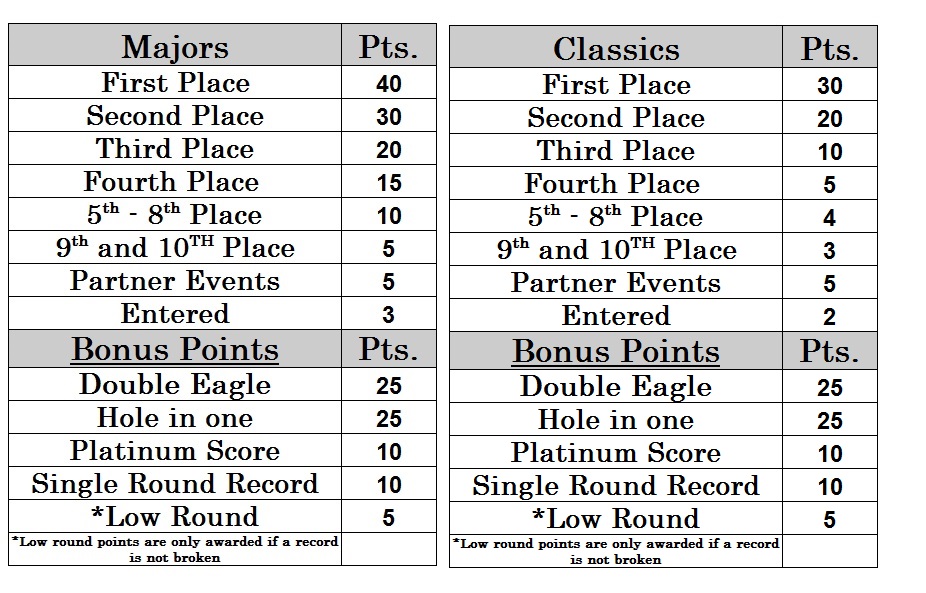 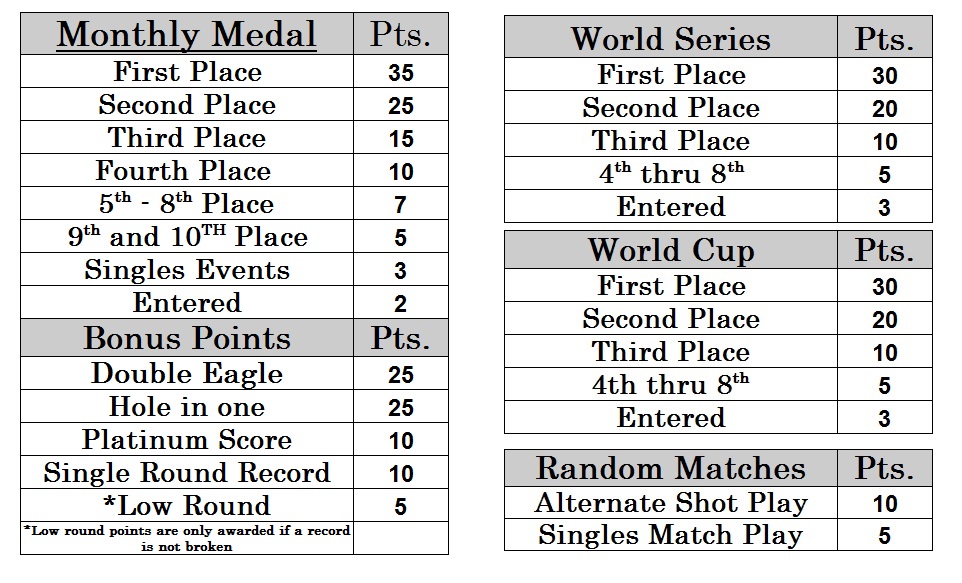 Team Co-Captains:
Dermot (Pogbah) and Mike (Mbowe) for The White Knights.
Wutpa (Nigel) and Priesum (Kelly) for the Black Knights.
The captain's only real responsibility is to help move things along, contact team-mates, encourage them to complete events and to check the accuracy of all the score sheets.
Any errors should be reported as soon as possible.
Bonus Points: They are shown above.
To be awarded the *Platinum Score points or the Record Round points you must obviously break the previous record or set a new record if one has not yet been established.
In the event a Record Round is not posted by a member in any event then the Low Round will be awared points.
​Hole in one bonus points are only given during a club event.
* A Platinum score is the previous tournament record handicap not included. 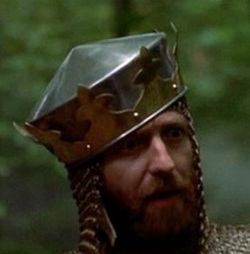 The History of The Search For The Holy Grail:
Gone is the colourful pageantry of The Ryder Cup as the dark ages fall  upon and the brave knights of Las Vegas.
They once again begin the long, treacherous search for the ever so elusive Holy Grail.
The Quest for The Holy Grail appeals to the idiot in all of us as well as the inner-child that still lives deep down inside.
The quest for The Holy Grail is in fact a fascinating event, it has taken nearly 6 years to discover that most of us still can't play virtual golf very well, however the ardent seeker of The Holy Grail would play Mount Everest if El Presidente decided to put a flag-stick on the summit.
The Quest for The Holy Grail can also be defined as an endless series of tragedies, obscured by the occasional miracle.
If profanity had any influence on the flight of the ball, this game would be played much easier than it in fact actually does and If there is any larceny in a members heart, the Quest  will bring it out in the best of them.
What other people find in poetry, a Broadway show or a famous art museum these knights find in the flight of that perfect drive and gaze upon it as it rises in solemn awe.
They salivate as they watch that very elusive twenty foot putt drop in the cup for an eagle.
The fascinating thing about the Quest is how it reflects the cycle of life, no matter what you score, the next time you go out you begin all over again in the hope of making yourself into something much better than before.
The Quest is a also a love affair and it is life itself.
​However it's unfair, it's a harlot, a trollop and it leads you on, it never lives up to it's promise, it's a boulevard of broken dreams.
You will learn Scottish just so you can curse your avatar in his native language when he lobs a perfectly good ball into the Swilican Burn.
The Quest is not a game, it's bondage, it is a romantic Shakespearean play in which disaster and comedy intertwine.
One minute you're bleeding, the next minute you're hemorrhaging and everything you do seems doomed..
Until, the very next shot you hit is dead solid perfect and you feel like you just painted the Mona Lisa.
It is not advisable to pray to the god's during this search, but feel free to pray to them to save your soul when you don't react well when you miss that seemingly easy five foot putt.
So enter the realm of The Las Vegas Knights Country Club and join in The Quest for The Holy Grail.
Whatever you do don't read the greens in Spanish and then putt them in English.
Remember this is a game in which you claim the privileges of age, and retain the playthings of your childhood.
​If you take the Quest seriously it will break your heart, because it was obviously devised by a man torn with guilt and, eager to atone for his sins.
At dinner time you will find yourself shaping your mash potatoes into the ninth green on Oakmont and start flicking pea's down hill just trying to get it close, as your wife watches you in disgusted amazement.
You might also find yourself tilting your keyboard or shaking your screen in a futile attempt to coax a putt into the hole that is sitting on the lip.
And finally when you are having the best game of your life late at night, the lights are turned off and you drop a very nice eagle putt and cry out "YES! YES!”
You hope the wife is asleep and you quickly cover your mouth and hope you didn't wake her.
You then make a very sweet delicate chip only to have it hit the stick and end up in the green side bunker: “Ah! You dirty little bitch!”
Then the perfectly straight long drive and a great bounce and it rolls onto the green. “Talk to me baby Oh yea!”
You will see your wife is in the room, she will look at you, shake her head and as she walks off and under her breath you will hear:
“I knew it! I was sure that was some sort of a porn thing you do every night”
However if you don't take it too seriously it's a loads of fun so get out there and have some fun FFS!!!
And may God have mercy on your soul.