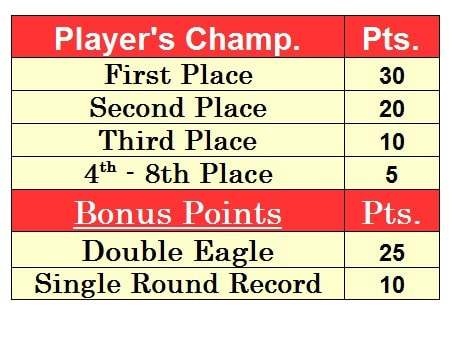 Format: Members have sign up to play in this event
We will be using World Golf Tour's Random 7 format on World Golf Tour's Best of Par Five's.
In 2020 no Golden Knight or Ryder Cup points will be awarded since it will not include all players (only those that sign up). however Ryder Cup points will be awarded.
Members will be divided into four groups shown below.
Group play begins on February 1st.

Group play:
After you have completed all your matches the top two in each division move on to the knock-out round.
Two points are awarded for a win and 1 point  each for a draw.
Tie breaker: If by some chance there is a tie in any division a playoff will be created to determine who moves on.
Knock Out Rounds / Bracket Play:
The bracket (shown below) will indicate your next opponent and the same Random 7  format is used until a single winner has been determined.
In the event of a tie the players would need to play another round until a winner is determined.
All the result of each match must be posted to a special "Post your Players Championship Results Here" on the forum or your results may not be recorded.

How to set up a Random 7 Match:
In the Game Mode window set the game to Practice, Course: Best of Par Five's.
*Tees: Blue (Hard) Green Speed: Tournament.  Wind: Moderate Lies: Even and finally Shot Timer: 90 Seconds.
Invite your opponent, tee off and play the seven holes, the game should only take about 20 minutes to play.
*This is an option, you may use the Championship tee's if you wish.
THIS TOURNAMENT BEGINS IN:Countdown