Tie Breaker rules:
It is possible there could still be a tie between members with the same handicap.
In these cases a special playoff round will be created to determine a winner.
If once again this is still a tie another playoff will be created until a winner is determined. 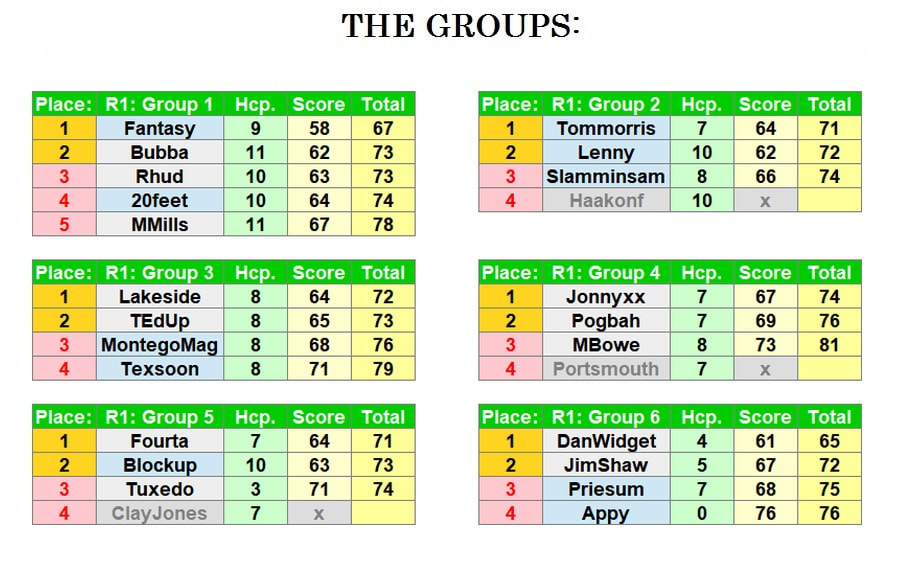 The history of this event is dedicated to Petervcpt who passed away suddenly on February 12th 2017. Peter inspired me to create and write this story for this event and it is loosely based on the 1980 classic South African movie "The Gods Must Be Crazy"
​ 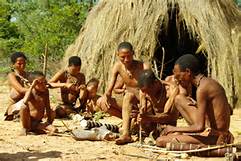 The History of The Golden Knight Challenge.
​
It looks like a paradise, but in reality, it is in fact, the most treacherous place on the planet.
The Kalahari Desert.
Most humans avoid the Kalahari, because man must have water to live. So this beautiful landscape is devoid of people, except for the little people of the Kalahari. Pretty, dainty, small and graceful. This is where the Sans People, also known as Bushmen live.
Where any other person would die of thirst in a few days, they live quite contentedly in this desert. They know where to dig for roots and bulbs, which berries and pods are good to eat.  And, of course they know what to do about water.
In the early morning, you can collect dewdrops from leaves that were carefully laid out the previous evening, a plume of grass can be a reservoir, and an insignificant clump of twigs can tell you where to dig and find water.
They have no crime, no punishment, no violence, no laws, no police, no judges, no rulers or bosses.
They believe that the gods put only good and useful things on the earth for them to use.
In their world, nothing is bad or evil, even a poisonous snake is not bad, you just have to keep away from the sharp end. Actually, a snake is very delicious, and the skin makes a fine pouch.
For the most part, they live in complete isolation, quite unaware there are any other people in the world.
In the deep Kalahari, sometimes they hear a thundering sound when there are no clouds in the sky, and they assume the gods have eaten too much and their tummies are rumbling up there, and they view this as the evidence of the gods' flatulence.
The one characteristic which really makes the Bushmen different from all other races is that they have no sense of ownership at all, where they live, there's nothing you can own.
In fact these Bushmen have never seen money, steel or concrete.
They are very gentle people, they will never punish a child or even speak harshly to them, so of course the children are extremely well-behaved, and their games are quite cute and inventive.
​ 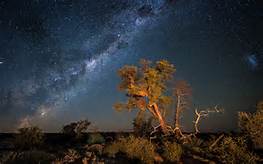 One day, a Nike Vapor one iron mysteriously falls from the sky somehow unscathed.
Xi wondered why the gods have sent this thing down to the earth.  It was the strangest and most beautiful thing he had ever seen.
To any weekend golfer however, this should come as no big surprise, after all everyone knows not even god can hit a one iron.
Initially, Xi's and his people supposed this strange artifact was a present from the gods and find many uses for it.
They employ it as a crafts tool and as a cooking utensil.
It was also beautifully smooth and ideal for curing snake-skin.
​ Xi also discovered by swinging it in the air, you could make music, much to the delight of all the children. 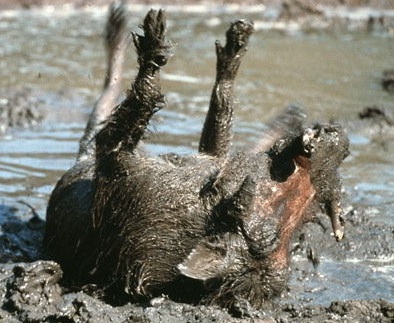 On another day, Xi, purely by accident, takes a swing at a porcupine he happens upon and since they are commonly used to make many delicious delicacies he decides to use the club as a weapon.
He swings wildly at the porcupines head misses terribly and instead, he hits a small stone, the stone flew like a bird, he thought, and hits a warthog 250 yards away, killing it instantly.
The tribe is now convinced this truly was a gift from the gods.
A feast like no other ever seen before was held that night.
Every day they discovered a new use for the thing. It was the most useful thing the gods had ever given them.
But the gods had been careless, they had sent only one.
For the first time, here was a thing that could not be shared.
Suddenly, everybody needed it most of the time, a thing they had never needed before became a necessity.
Unfamiliar emotions began to stir, a feeling of wanting to own, of not wanting to share, and other new things came, arguments, jealousy, resentment and even anger.
Since the club had caused the tribe so much grief and unhappiness, Xi concludes that it's an evil thing and the gods were absent-minded to send it to them.
​ Xi decides to make a pilgrimage to the end of the world and toss the seemingly cursed thing off the edge.
Along the way, he encounters a diverse assortment of people.
​
The real story begins when Xi reached the edge of the Kalahari, he became very hungry, and happens upon a very strange creature with two heads.
He tee's up another rock and smacks it toward th creature with the untrustworthy one iron.
This time he sliced the stone very badly and only stuns one of the heads of this strange beast.
​The local witch doctor is enraged at Xi, and he is abruptly arrested and jailed for attempt murder of livestock.
This is when Xi first comes in contact with Nigel and his trusted assistant Steve.
.When Xi first saw these people, he thought these must be ugliest people he'd ever come across.
They were as pale as something that had crawled out of a rotting log.
One of them had hair that was quite gruesome and long, it was stringy like dry grass and white.
He had a fire inside him, and, smoke came out of his mouth and nostrils.
The other one was not much better, he had hair growing on his face and was very tall and big.
Xi thought he resembled a giraffe.
You'd have to dig the whole day to find enough food to feed them he thought.
Although it was a hot day, they were covering with skins that looked as if they were made from an ostrich skins.
They were doing strange and magical things, and it struck him, they must be two of the gods, and he wondered what they were doing on earth.
But he was very glad he met them, he would give them back the evil thing they had sent him and go home to his family, and so he said as respectfully as he could:
"This is a very evil thing you have sent me, please take it and throw it off the end of the earth. It has brought unhappiness to my family. If you don't through it off the end of the earth it'll bring grief to you and your family as well”
But they were very rude, they would not take it back and laughed at him.
The funny thing about these gods Xi thought, was that they couldn't speak, they could only make chattering sounds like monkeys.
Nigel was able to revived the creature, and because he knew a little about The San's people, defended Xi at his trial.
He told the judge that Xi will die if kept incarcerated and he applyed to employ Xi as a tracker for the remainder of his sentence in lieu of prison.
​The local judge grants Xi probation providing he remained in Nigel's care. 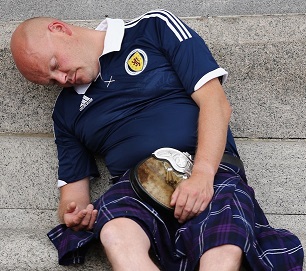 Meanwhile, Slammer and his band of highlanders invade Kelly's school and took her and the students hostage as human shields for their escape back to Larkhill.
Nigel, Steve and Xi soon discover their field work (observing the local wildlife) is on the Scotsman's and his band of guerrillas chosen path.
They manage to immobilize them however, by placing ice cubes in the glasses of
the 150 year old single malt Scotch Whiskey they were drinking.
​This caused them all to passed out from the sheer shock at such a diabolical   disgusting vile act.
​ Kelly and the children were saved.

With Xi's sentence over, Nigel insists upon paying him wages and gives him a priceless, meowing golf ball and sent him on his way.
He does his best to explain to Xi, the relationship that is supposed to exist between Xi's one iron and the the golf ball with limited success.
Xi become very agitated, he angrily tried to give Nigel back the one iron, as politely as he could Nigel refused. Nigel and Xi finally parted ways and Xi continued on his journey to the end of the earth. 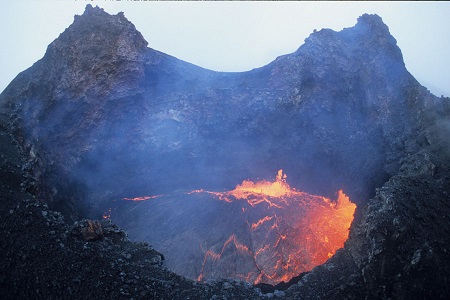 Xi eventually finds himself at what he believes is the god's window.
It  was nothing like what he had expected.
He found himself on the top of a cliff with a raging river of molten lava flowing thousands of feet below.
On the opposite side of this fiery valley was a small patch of green with a tiny red flag in the middle. A line was drawn in the sand and a "Tokoloshe" was sitting atop a large pot of gold awaited him.
Now what is a Tokoloshe one might ask!
Well a Tokoloshe is a dwarf-like creature that is considered a mischievous Gremlin, that can become invisible by drinking whiskey, in other words, a Leprechaun, they are in fact direct decedents. 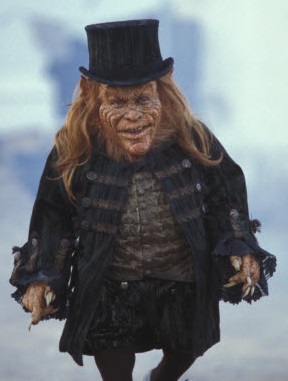 The Tokoloshe excitedly welcome Xi and said:
”If yer belt dat barl into de 'ole under de red flag yer can 'av dis craic a gauld. If yer miss oi keep dat wan iron.”
This Irish accent along with what he saw before him convinces Xi that he had in fact reached the edge of the world.
His hands sweating he nervelessly took his stance on the makeshift tee box.
Had you been there you would have heard a pin drop. Xi took aim, and then takes a very fast wicked swing at the ball only Arnold Palmer would admire, he hits the ball dead solid perfect for the very first time!
The only two sounds to be heard was the fading Meow, meow, meow, meow....... sound that the ball made, as well as the whirling sound the one iron made as it slipped from Xi's sweaty grasp and it spiraled into the abyss of the fiery grave thousands of feet below.  After what seemed like an eternity the ball landed on the green patch, one hopped, rolled and rolled and rolled... and suddenly disappeared from sight into the   hole.
The Tokoloshe exclaimed:
“De god's must be aff potty, naw wan can belt a wan iorn dat well”
He reluctantly relinquished his pot of gold to Xi, who promptly returned to his tribe and his family, where he received a hero's welcome. 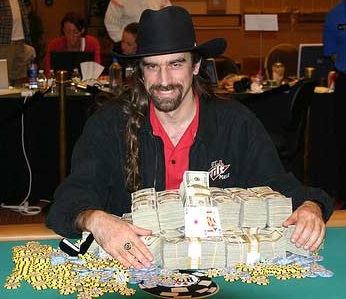 In honour of "El Presidente's " South African roots the tribe invested some of the gold in a Poker Room in Las Vegas in which Nigel's trusted assistant is often seen giving free lessons to the unexpected visitors.
Powered by